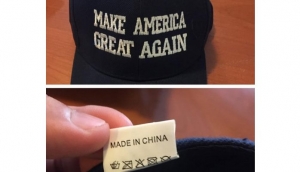 Picking through the phenomenon that is the rise of Donald Trump is not easy. Most people from outside the USA are looking on in horror at the car crash that we see unfolding in front of us. With the post RNC poll bump putting him (barely) in the lead for the first time – we, still recovering from the Brexit result, fear anything can happen. His questionable Leadership style is causing shock in many quarters.

The groundwork for Trumps rise was set by the GOP (Republican Party Leadership) who for the last eight years at least have been living a lie. It would seem that monied and other interests have caused them to blatantly ignore, block or deny (in no particular order) climate change, intellectualism (for Brexit this was “Experts”), evolution, their illegal war in Iraq, affordable health care and any form of gun control. Their tirade of abuse of Obama as president was so ferocious that it must be based in fear or racism. This from the party of Abraham Lincoln. Contrast this behaviour to the previous GOP leadership – George Bush Senior left a note for Bill Clinton which included “You will be our President when you read this note. I wish you well. I wish your family well. Your success now is our country’s success. I am rooting hard for you.”

Republican core beliefs about family values, independence, less government rather than more and keeping the status quo are valid points of view, none of which require these inconsistencies. Many competent, experienced suited men were seen to espouse twisted reasoning, denials and spin to suit their needs rather than the will, or the good of, those who elected them (70%-80% of US citizens want some form of gun control). Their members have seen this and have also experienced a massive depression, loss of property and jobs and don’t know who to trust. A large proportion are not educated enough to differentiate truth from spin and most gain their insights from watching Fox news, a biased Republican oriented “news” channel for whom integrity is an after-thought.

Then along comes the anti-establishment candidate, who is not a “hateful” Democrat, with all the answers. He uses simple emotional statements, outright lies, fear mongering, “us and them” rhetoric and claims to have a vision and the solutions to all their problems – if only they elect him.

Fear is the fuel of Trumps campaign. He paints his vision realising that people are fearful and paranoid and feel they are being unfairly treated. He has aligned himself with the emotion, stoking paranoia, being loose with the facts (21 fact checked lies during his RNC acceptance speech). Many of his supporters are people that have seen a decline in their situation and wake up every morning with anxiety about their futures. When you feel like this you look for reasons and project this outward to blame someone or something other than yourself. Trump has given them some targets – Illegal immigrants, Mexican workers, Muslims, trade deals with China and Democrats. All sorts of economic answers are ignored. He connects with his people by telling them what they want to hear and generating memorable soundbites that have got him billions in free publicity. It all seems to make sense to them, like it did in Germany in the late 30’s and early 40’s.

Like Leadership styles in history of the same sort, where divisiveness, lies and hatred form the core of the message, there is revolution, conflict and victimisation. When our Leaders talk and act like this, followers feel they have permission to express and act on their fear and hate. We see this on the streets in the US (and we have seen it post Brexit). When the checks and balances of a democracy like accountability and unbiased reporting are weak and when trust and integrity are gone a gap opens for this other sort of Leadership. It invariably ends badly.

Aidan Higgins BE MBA of ADEO Consulting is a Leadership, Emotional Intelligence and Teamwork specialist working with Leaders and Teams in Ireland and the UK. He has over 25 years experience working in various capacities with individuals, teams and organisations of all sizes.