5 EASY WAYS TO BRING GRATITUDE TO THE OFFICE

This time of year is filled with swarming demands. You are juggling to-do lists, replies to investors, flittering holiday schedules. You have yearly success to evaluate and ugly sweaters to pick. It’s easy to feel like there is not enough — not enough time, not enough talent, not enough appreciation for the work you and your team are doing.

All this not-enough-ness leaves us feeling empty and depleted rather than full of comfort and joy.

Conscious leaders can gracefully combat feelings of scarcity by incorporating gratitude into the workday. Simple shifts towards thankfulness will inspire teams and provide hope and prosperity for the year ahead.

Here are five easy-to-implement ideas to inspire gratitude for your team and organization.

Take a break and grab a pen. Go sit somewhere quiet and make a list of what you are thankful for in your organization. Are there standout employees making a difference? Are you proud of new accomplishments or thankful for the light dancing across your keyboard as you type your next important email? Taking time to stop and make a list of what brings you joy at work can ground you. Then, take the time to share your responses with your team. When you lead with a vulnerable heart, this sets the stage for employees to follow, which leads to …

Leaders are programmed to problem-solve. Addressing challenges and navigating unknowns probably led to your success. It is natural to jump right in and tackle obstacles with your team. A key shift towards leading with gratitude is to first recognize all the things going well right now. Start simple to build your gratitude muscles. The printer is working, and the lights are on. All members of your team arrived safely on time. Fresh coffee is percolating. Then you can move on to recognize the positive results of your team’s contributions. Last week’s demanding client is now thrilled with revision three of their blueprints. Perhaps you cut costs by changing suppliers and made five new connections leading to new sales.

Keep a running list with your team and review together at the end of each month. Celebrate your successes and confidently move forward to address new challenges. You can also…

3. Learn what your employees are thankful for in their work.

One-on-one meetings are essential to healthy workplaces. Providing space to share successes and voice concerns with a leader on a regular basis leads to better results. Rather than drag, these hours can be inspiring problem-solving sessions designed to provide insight on engagement and satisfaction at work.

These questions prompt employees to ponder which aspects of the job they enjoy and where they are thriving. They also uncover areas for improvement and perceived feelings of positive impact in their current roles. If employees struggle to identify what they are thankful for, you can work together to create a plan to make work more rewarding. Encourage them to go back to point number one and make their own gratitude lists. If they feel comfortable, invite them to share their responses with you.

Conscious leaders understand that people are vital to a healthy organization. With mixtures of personalities, preferences, and time available, you may feel unsure of how to express your thanks and appreciation to members of your team. Some folks love a good superlative, while others would prefer to melt away than stand on stage and accept an award. Take the time to ask what makes your employee feel special. Add a line to on-boarding paperwork to track favorite desserts or what movies they enjoy. Keep these notes in their file or their contact info on your phone. Then, when you notice a standout action, you can leave a note and a small token of appreciation on their desk. Too touchy-feely or out of budget? Jot a quick note-of-thanks email and click send. Or better yet…

5. Say thank you, in person, with an authentic heart.

My first job was a receptionist in a nail salon. I made appointments, put on jackets, and buckled folks in to the driver’s seat so their nail polish wouldn’t smear. At the end of each day, the owner would tell me, “Thank you for your work today.” No matter how many toe-nail clippings I’d swept or demanding women I’d navigated, I always felt seen and appreciated when my boss would say thanks. As an organizational gatekeeper, I’ve worked with many colleagues who say they like their work and they wish their bosses were more aware of how they navigate the frustrating parts of their roles. Employees want to be seen. Acknowledge the metaphorical toe nails and repeat the phrase, “Thank you for your work today,” with a sense of authentic appreciation as often as you can.

It takes time to see your people. When you choose to invite gratitude into your spaces and conversations, you can appreciate the positive impacts you and your organization make. Try out these ideas before the end of the year. With practice, you’ll be able to encourage your team to focus, with grateful hearts, on all you set out to accomplish.

Making workplaces truly great: How management toxicity affects employees, and what to do about it

What matters – for employee engagement and productivity and, more important, for employee health – is the work environment and the work itself. 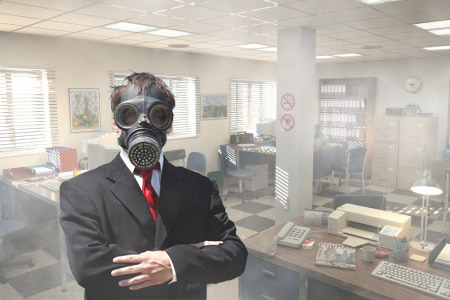 “Management toxicity” is affecting more and more Indians just as we see it in Americans and others around the world. Of 8 lakh suicides across the world annually, about 1 lakh are Indians. India is the world capital for diabetics; and cardio ailments are affecting people in their 30s and early 40s.

We wonder whether annual lists of “great/best places to work” have any sanctity, given that many employees from such listed companies frequently complain of toxicity in management. We question the ethical and serious bias of the agencies that do such ratings, because they try to sell their products and services to the companies they are listing. We suggested health-related data as an added criterion, and a shift in orientation of the rating agencies to “non-profit” for removing serious bias.

Chronic disease, caused in part by stress, is one reason that healthcare costs are soaring around the world. Because most stress comes from work, the workplace has become a public health crisis.

But workplaces do not have to be toxic and stress-filled. Our research uncovered two crucial elements that can build healthy work environments and that don’t cost much to implement. By providing people more job autonomy and social support, enterprises can create healthier workplaces that are less stressful and eliminate the many costs related to stress.

What matters – for employee engagement and productivity and, more important, for employee health – is the work environment and the work itself. Not having a boss who heaps scorn and abuse, because the health hazards of workplace bullying and incivility have been well documented. Having a private office or at least a workplace with comfortable temperature, good lighting, and acoustical privacy, ensures that the physical work environment does not impose stress.

A study of British civil servants revealed that the higher the person’s rank, the less likely that individual was to suffer from coronary artery disease. Why? When British epidemiologist Michael Marmot and his colleagues investigated, they found that the determining factor was the level of job control. Being micromanaged is stressful, and having more control over what you do and when you do it is positively associated with health and wellbeing.

The problem of micromanagement arises because corporations often promote people based not on their ability to manage others but for skills such as their capability with budgets or project management. Because many managers can’t manage, in the sense of coaching others to do their jobs better, one of the worst “sins” many employees encounter at work is being too tightly controlled.

As for the second element – social support – evidence suggests that having family and friends, and having close relationships have a direct effect on health, and that buffers the effects of various psycho­social stresses. People who were less socially integrated had higher mortality rates and higher rates of cardiovascular diseases and even cancer.

Changing the environment to make things better is not that hard. Just stop doing the things that create toxic work environments: Get rid of forced ranking, the “grading ­on ­the ­curve” performance review process made famous by GE; don’t pit people against each other in the guise of internal competition that results in a rat race in which people work crazy hours and travel excessively; invest in management processes where senior managers can mentor juniors; stop the transactional approach to employees by not viewing them as factors of production and trading money for work.

When people have hard times, provide them with help and support – meals, babysitting, companionship, time off and a signal that their colleagues and the company cares about them. With a supportive environment, people are healthier and more tightly integrated into the company.

Holiday and birthday parties, and events that celebrate shared successes such as product launches or project completion – almost anything that brings people together in meaningful context – helps build a sense of shared identity and belonging.