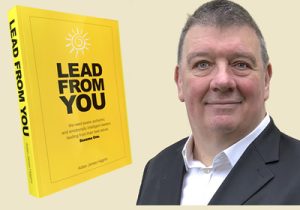 Aidan James Higgins is the CEO of ADEO Consulting. He is a Leadership Consultant, Emotional intelligence & Teamwork specialist and is passionate about getting people to be at their best. He is the author of the book Lead From You, which launched at the end of 2021 and is now in 7 countries.

This episode speaks to three concepts, awareness, authenticity & emotional intelligence. Aidan employs the psychometric The Enneagram to support leaders understand themselves and others better and to Lead from You.

Points made across the podcast episode

Fish Slap story explored and why it resonated with Aidan. He was woken up at a Management Training Program where he realised, he was living from one world view. The training had shocked Aidan that the world he had been inhabiting was only one point of view.
Most of us are asleep. We are working on our programming without interrogating it to improve our self- awareness.
Aidan wrote the book Lead From You because of the appreciation clients & friends held for the work and their interest in learning more.

Feedback from the book suggests readers are appreciating the importance of self-awareness and how it is contributing to clarity of decision making, trust building, empathy & compassion.Aidan points out that we must have self-compassion to appreciate we have grown up to be & do in a particular way and until we come to be aware we think it is the only way.

Aidan has attempted to author a book that helps a person be a more complete person, to be happier and to lead. Aware, emotionally intelligent & authentic Leadership is what is needed in the 21st century People & Leaders need to wake up and pull back what is referred to as the veil of illusion.

To become self-aware, to be authentic and emotionally intelligent requires of a leader or team member to wake up. Once people wake up, they generally become curious to learn more. Resistance is often present in this work, too many of us are trained to avoid emotion, being soft and being empathetic or compassionate.

People do not realise they are unaware. Aidan shares a story from Anthony de Mello to help explain what he means by being self-aware. Tich Na Han says “people will not change until they are sick of suffering”
We are subject to a programming that was brought into us early on in our lives. We make all kinds of assumptions about the way we are to lead or act. Example: Must remain in control.

Benefits of becoming self-aware & other awareness means clearer decisions, clearer emotional awareness and therefore information, access to creativity and innovation. We evolve a view of the world until we see it from where it has come and how useful it is to remain. For example, the child who learns to please people to get attention or a person who is ignored if they do not win can be programs that thwart successful leadership in the future.

Becoming self-aware is not a thing you do it is about understanding. Knowing what water is doesn’t make you wet.
Aidan helps clients become aware by first creating a safe space to be together and then by sharing how people are likely to have come up through the world. He shares his framework and gives people space to reflect on their beliefs, habits and patterns, ways that have informed up until now.

Aidan shares another example where he asks a client how is feeling when he is not working. The client responded “trapped” and felt the rise of anxiety when he wasn’t doing anything. This client then became aware that underneath is drive to get things done, there was an anxiety driving this way of being. Understanding changes behaviour not a set of things to do.

Sometimes you ask someone how they feel, and they do not have the words or language to tell you. It can often be about giving clients words.

According to a Harvard Business Review, improved self-awareness on teams doubles decision making capability & doubles the ability of a team to deal with conflict.

The Enneagram is a system that has been around for years. Authored by the Greeks who divined that there were 9 ways to look at the world. These world views begin around the time of a child where object constancy is understood. It is similar but deeper than MYERS BRIGGS type indicator.

The Enneagram employed on teams helps team members understand each other better. Understanding in turn leads to emotional intelligence. Working with a team, Aidan will start by building the self-awareness of the members of the team, often by using the Enneagram tool. Then he moves to create awareness of the other members of the team, which often brings a team to compassion and fuller sharing.

Aidan is amazed at how often the team fundamentals have not been worked. In an example Aidan shares how a Team Leader confused sending a team memo about the purpose of the team and their roles meant that they had been communicated with and would therefore understand.

Other examples of where teams get stuck include conflict avoidance believing “we are too nice” can mean bringing new ideas is risky.
Addressing team norms early on can mean a team becomes more effective early on and can in many instances take on bigger projects.
Team resistance comes from being too quick with the change and not allowing buy-in over time, not explaining the “why” for change & not taking care to identity willing enthusiasts who could tip the team into working with the change.

With some teams all you can expect to get to is professional respect. Personal conflicts can mean enmity for years.
Resistance can also present from a formed organisational culture. Teams need to remember that changing the composition of a team means that previous shared understanding is temporality lost, requires a period of mourning and then a willingness to induct new members. Teams must move back to Norm and storm where they had originally moved through all the four phases of team development: forming, norming, storming and performing.

Aidan explains that understanding is a holistic phenomenon.

Team Emotional Intelligence requires that a team deals with emotions, and we deal with them as they arise. Some people are terrified of emotions, or some of the 9 types are terrified especially in a high-pressured business that needs to get things done. There is fear that emotional expression will slow the team down. Instead, the team needs to generate appropriate boundaries, self-regulate and self-correct.

The evolutionary mind suggests that teams are tribal, require a purpose and a Leader is appointed by way of certain needed tasks.
Notwithstanding that Aidan has already littered this conversation with anecdotes and stories he was asked to share a story of a team that illuminates his work.

He chose a large team that was asked to go through extraordinary change, to cut costs while simultaneously improving productivity. This team was not provided all the information available, and they were not allowed to communicate the required change to those on the ground. Luckily the team were already self-aware, were IQ, EQ savvy and had each taken the Enneagram survey. Aidan had been working with the same team for two years. The situation demanded an understanding on the self of ambiguity, the impact of mindsets they needed to influence and the impact of culture. That project was about teaching the team to focus on Purpose, decision making, trust and resilience but also about their own personal issues with control & trying & failing that needed to be managed.

Organisations today need to think in terms of Teams of Teams to be able to deal with the pressures & demands of today’s business. Complexity and expertise at the edges makes the case for this way of thinking.

Teams need to be agile and have a peer structure where everybody contributes and where the Leader is a servant or at a minimum a supporter of the team.

This podcast and information was collected from the original page on Tara Nolan’s website here.

Equality and inclusion requires leaders to be aware of their subconscious bias.

Equality and inclusion requires leaders to be aware of their subconscious bias.