#Brexit result is evidence that we need to get the trust back.

#Brexit result is evidence that we need to get the trust back. 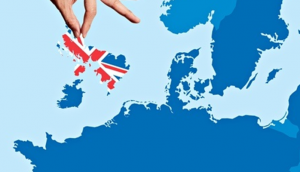 I worked for nearly seven years in England after graduation and I got quite fond of your average middle English Joe and Jane. I worked side by side with some great people and played some rugby with and against some of the nicest people. This morning I am feeling somewhat sorry for our neighbours, who after #brexit have made an awful decision because of lack of trust in Leadership, unbridled misinformation, populist rhetoric, racist shield banging and outright lies.

Its been like watching a car crash in slow motion, after watching some despicable individuals throw oil on the road. Congratulations flowing in from Europes right wing 10% on a victory for nationalism are galling, particularly as this sort of thinking led to the war that caused the European Union to be set up in the first place, with England at its core.

Lack of trust in leadership and the negating of true expert opinion is a key element in this result. Similar to the causes attributed to the rise of Trump in the US. Lack of understanding of basic economics and the belief in lies written on posters and buses is also part of this. In Ireland I think we may be headed down that same road and its something we may need to fix before it gets any worse.

After this shock we need to change our mindset to WHAT NEXT. It’s happened, so how do we deal with it. In my view the biggest worry for Ireland is the expected UK recession and the resultant lack of spending power in our biggest single market. With the drop in sterling today our pricing has already risen by 5%. Other tariffs may be added, but also inflation in the UK may even things out. As for Northern Ireland, I remember well when there were borders in the north. Not just passport controls but the big black bomb proofed towers with armed soldiers, some not in their twenties, guarding them. Its not going to be as bad as then. However one has to worry for the economies at the border (both sides) and the fragile economy of Northern Ireland.

In terms of Leadership – the US and the UK are demonstrating a new kind of politics. Gone are the thoughtful, direct and trusted sources. Some would say that’s because gone are the thoughtful, direct and trusted people. I think they are still there but struggling to be heard …”‘s’cuse me… I’d like to say something…” Now we have NOISE! … soundbites, social media, trolls and clickbait.

Clickbait works by generating or taking content from any source that may or may not be true but is interesting enough or shocking enough to attract your attention so they get paid for your click. This leads to a lot of terrible content and misinformation. Take the anti-vax rhetoric for example – clickbait sites are paid to re-post and re-post that dangerous unethical rubbish.

We have also shrewd PR generating photo-ops and noise which the news media cover rabidly. Look at Farage and his poster “events” . They create an event which grabs the news-cycles and makes their point in large simple (if deceitful) images. Enough of this allows outsiders like Farage to generate more noise than anyone else in the noisy environment and win the attention of millions. In the US the rise of Trump generated by far the majority of the coverage of the primaries. It was like a Punch and Judy show and everybody wanted to know who Punch would punch next. The news channels need to wise up. They need to differentiate between real news and generated news. They are being manipulated and the tail is definitely wagging the dog.

Couple this to the short attention span being driven by our multitasking high speed lives and its more difficult to find the truth of any matter. There is also an assumption by many that every news source has an agenda and is in the pocket of some wealthy elite.

This is partly true, however even regulated news sources (such as the BBC) are not as trusted as they should be. I came across Jamal Edwards MBE recently who is a 24 year old entrepreneur with his own news channel. He founded his channel because his sister (16 at the time) and her friends did not trust the existing news sources to be unbiased. He gets his stories directly from AP and repackages them. Great news that they wanted to be informed but sad that they felt they could not trust the established feeds.

In the US we have Fox News, the most watched news channel (and exclusively watched) by Republicans. Telling their viewers what they want to hear and keeping it to the party line, its so bad as to be almost funny. I watch it sometimes to examine the subjectivity and almost for comedy relief (yes its that poor) and yet it is the main-stay of so many peoples source of information.

I am hoping we adapt by recognising clickbait for what it is – and ignoring it – disinformation for what it is and not letting it distract, and by finding a way to recognise the truth from the noise when we see or hear it – rather than content that may frighten us of which may just reinforce current opinion. We need to see our political leadership STOP claiming bias in the main stream media every time they are disagreed with, when in fact its mostly telling the truth as they see it.

We need to see leaders being more direct, espousing and living their values and leading by example. We need the serious ethical media channels smarten up, differentiate manipulation from real news while keeping our leaders honest. They need to raise the bar again and earn back the trust we need to see the unbiased truth and make informed decisions.

Aidan Higgins BE MBA of ADEO Consulting is a Leadership, Emotional Intelligence and Teamwork specialist working with Leaders and Teams in Ireland and the UK. He has over 25 years experience working in various capacities with individuals, teams and organisations of all sizes.