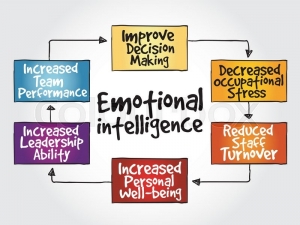 When emotional intelligence is mentioned, there may be agreement that it’s indeed a great thing for someone to be more relatable, more self aware and better at controlling impulsive behavior.

But does the emotional intelligence of a team really have bottom-line consequences?

While a strong consensus may not have existed before, that is changing as more companies recognize the value of EQ. Many organizations are now hiring for emotional intelligence (EQ) and evidence is mounting that EQ pays off in higher sales and productivity, and lower turnover.

“Emotional intelligence really is the secret sauce,” says James A. Runde, author of “Unequaled: Tips for Building a Successful Career Through Emotional Intelligence,” and a special advisor and a former Vice-Chairman of Morgan Stanley.

Runde says that too many employees don’t realize that “brains and hard work are not enough” to give them a successful career, and too many leaders don’t understand how the lack of team EQ skills hurt performance for the team and for the organization.“In the era of artificial intelligence and virtual reality and robots and drones – all those things are wonderful and productive, but for people trying to succeed in a solutions business, you’ve got to have people who can relate to other people,” he says.

According to psychologist Daniel Goleman, there are five elements that define EQ:
1. Self-awareness.
Those who are aware of their emotions don’t let them get out of control and are honest with themselves about their strengths and weaknesses. They work to improve and become better performers.
2. Self-regulation.
As they are aware of their emotions, these people don’t let themselves get too angry or jealous and don’t make impulsive decisions. They show thoughtfulness, comfort with change, integrity and the ability to say no.
3. Motivation.
Those with high EQ are very productive, love a challenge and are effective in whatever they do. They know the importance of working for long term success.
4. Empathy.
They are adept at recognizing the feelings of others, even when they’re not obvious. They’re good listeners, honest, don’t stereotype others or rush to judgment.
5. Social skills.
People with high EQ are easy to talk to and are eager to focus on helping others be successful. They are team players who are good communicators, help resolve disputes and are relationship builders.

Marian Ruderman, senior fellow and director of Research Horizons at the Center for Creative Leadership, is also an associate member of the Consortium for Research on Emotional Intelligence.
“You may have the smartest, best idea, but you won’t be able to execute it if you can’t relate to people,” she says. Ruderman says that she doesn’t believe leaders pay enough attention to EQ on their teams, partly because they may lack the “vocabulary” to discuss EQ and its implications. She says that as more organizations focus on processes and not just tasks, EQ will become a much more important part of the success equation.

“I think people used to be more homogenous in the way they worked, but now we must all work together and it’s much more diverse and we must all find ways of working together,” she says. “That means teams must embrace EQ.”

It’s also important to realize that just because a team has emotionally intelligent members does not mean it will automatically lead to an emotionally intelligent group, points out research in Harvard Business Review from Vanessa Druskat and Steven B. Wolff. Further, building team EQ can be more complicated because teams interact at more levels, both as a group and individually, they say. The most effective teams have the “emotional capacity” to face difficult situations and seek feedback on processes, progress and performance and set up norms to respond effectively to the emotional challenges a group confronts daily. They have a “cando attitude,” they say, and are optimistic, positive and create an affirmative environment.

Ruderman suggests that any leader trying to get teams to develop greater EQ is to begin with “why it’s important.” One of the ways to do that is by making the business case of how EQ can bring greater bottom-line results now and in the future, Runde says. “People might think that books on EQ belong in the psychology section of a bookstore, but they really belong in the business section,” Runde says. He adds that if organizations don’t prioritize EQ, “then you will be just a run of the mill service provider,” he says. “Sure you’ll get business, but you’ll never become a trusted advisor. You’ll never be the company a client calls before they call anyone else.”

Be an advisor, not a vendor. When making a pitch to a client, don’t focus mostly on your company’s credentials and a bunch of charts and graphs. Instead, craft a “can do” pitch that addresses the positive outcome the client wants rather than a bunch of technicalities or the “plumbing” that will be required, he says. “Subtly shape the selection criteria to fit your strategies,” he says.
Don’t push too hard. Competitors may exaggerate the truth, beefing up their own capabilities and promising big outcomes or deeply discounted prices.

That’s why it’s critical for leaders to encourage employees to not be “pushy” with clients so that the clients feel they’re being rushed into a decision. Personal connections are still important even when dealing with tough competitors.

Be good listeners. “Some people listen to respond, and some listen to listen,” he says. “It’s the people who listen to listen who learn the most and establish trust.” Only when clients believe your team has their best interest at heart will they trust enough to reveal their goals and issues. Once that is understood, then a range of options can be crafted for the client. “You are not a used car salesperson simply pushing to close this deal,” he says. “You want a loyal client who will come back again and again with their problems.”

Stay in touch. Once a deal is closed or a project is finished, maintain open communications with the client and be alert to how stakeholders are reacting to the finished deal. Changing markets may mean the project needs to be fine-tuned over time – or even redone. Creating long term client relationships requires “a significant investment in time and cost,” but can even lead to a client calling your organization to implement a deal originally pitched by a competitor, he says. “That’s because you’ve put in the time with these people and they trust you,” he says.