The Value Of Emotional Intelligence For Leaders

The Value Of Emotional Intelligence For Leaders 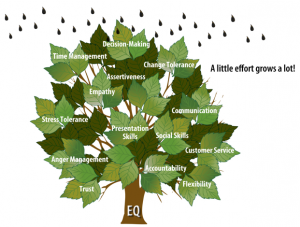 When you advance in your career, achieving more success and fulfillment, there are areas of potential and growth that are still latent.

Plato eloquently wrote, “Human behavior flows from three main sources: desire, emotions and knowledge.” In order to expand yourself, desire, emotional self-awareness and self-discovery through knowledge are three qualities that are paramount for greater success.

As an executive coach, my role is often one of guiding the inner process to reveal the potential that you are not aware of, similar to a caterpillar before it becomes a butterfly. It’s a potential that simply hasn’t been developed yet.

Here is where emotional intelligence (EI) comes into play. IQ and technical expertise are no longer sufficient to be successful as a leader or to move up in an organization. A popularly cited survey from 2011 showed that 71% of employers valued emotional intelligence in an employee over IQ. In fact, 59% of employers would not hire someone if they had a high IQ but low EI.

When you are high in emotional intelligence, you, as a leader, are able to increase employee engagement, retention and performance because you:

• Are demonstrating the ability to manage your own emotions

• Understand your effect on your team

• Are able to resolve conflict effectively and quickly

Have enhanced communication and listening skills

• Are able to stay calm in times of stress, conflict and challenges

• Understand the emotions of others

When you reach the managerial level or higher, you often rely on the same skills and strengths that brought you to the top. However, overusing your strengths can also be a weakness. Increasing EI enhances your toolbox, bringing awareness of when to dial down a strength and use a different one. Increasing one competency will increase other areas, giving you the edge to:

• Recognize when emotions are influencing your thinking

• Understand and gauge the emotions and psychological states of others

Administering an EI assessment is beneficial because you will have a full picture of the strengths you have and what will need developing. When you receive the results of your EI assessment, it reveals the competencies where you are strong and areas needing development.

Another way to use the assessment is during the hiring process or when deciding who to promote into managerial roles and higher. Here is an example.

I was working with a company that called me because it had moved a loyal, hardworking employee into a managerial position, but he was failing in his new role. When I reviewed his assessment, his interpersonal skills (3 out of 15 competencies) were extremely low. Prior to moving him into this position, it would have been more prudent to give him some managerial training to develop the skills necessary to be successful in this position. Ultimately, they ended up letting him go, when had they reviewed his assessment first, they could have prevented the bad feelings that ensued between themselves and their employee.

Assessments reveal competencies (which are learned abilities) for strong, successful leadership, such as:

These eight competencies fall under the category of self-awareness, the bedrock of high EI. Increasing your self-awareness and understanding your own emotional states, behaviors and what motivates you improves your ability to understand others. Expanding self-awareness is an ongoing process, as it is a challenge to “know thyself” fully.

Let’s take a look at impulse control, the No. 1 derailer for managers and leaders. Lack of impulse control is a result of the brain experiencing a perceived threat, prompting you to act from an emotional stance rather than maintaining control. I mentioned earlier that competency is a learned ability. Yes, you can learn to maintain control even in the face of adversity, challenges and stressful situations.

When I coach individuals who are low on impulse control, the technique to conquer this knee-jerk reaction is to first reflect back on what was said and then ask questions. Asking questions is a way to gather more information and understanding, calming down the emotional hijack and allowing you to maintain your control. Asking questions can also prevent triggering the other person, and it allows them to explore the situation and maintain emotional control as well.

Individuals come to me for coaching because they want to move up the ladder yet are often unaware of these eight skills needed to be successful in the new role. When we review their results, we focus on one area to strengthen, because when we strengthen one, others usually increase as well. Strengthening impulse control, for example, can boost assertiveness, flexibility and confidence.

Increasing emotional intelligence is the differentiator between an exemplary leader and one who is not. High EI has been proven to give one climbing the ladder a competitive edge, setting them apart from other candidates.

If you’re already in a leadership role, increasing your EI is probably one of the best investments you can make for yourself and for your organization. Being smart is not enough. If you cannot manage yourself, your technical expertise is compromised, and team morale goes down. Emotionally intelligent leaders inspire others, boosting morale and thus increasing productivity and employee performance.